To give the teenage audience some perspective, the early history of the church will be put under a microscope this evening. It will be presented in a new scenographic framework, with world history as a backdrop.

Modern communication has helped arouse interest in the project already several weeks before the camp.

‘’We have been extra involved in this project because historically it is very interesting, and not least professionally challenging, to convey historical material to young people,’’ says one of the evening’s producers, Arve Solli.

For several weeks he and a team of young employees from BrunstadTV have been working on preparing the evening’s content for the thousands of young people sitting in the hall. Several films with both documentary and animated material will be presented, and an interactive timeline fills the entire large LED screen on the stage’s backdrop. 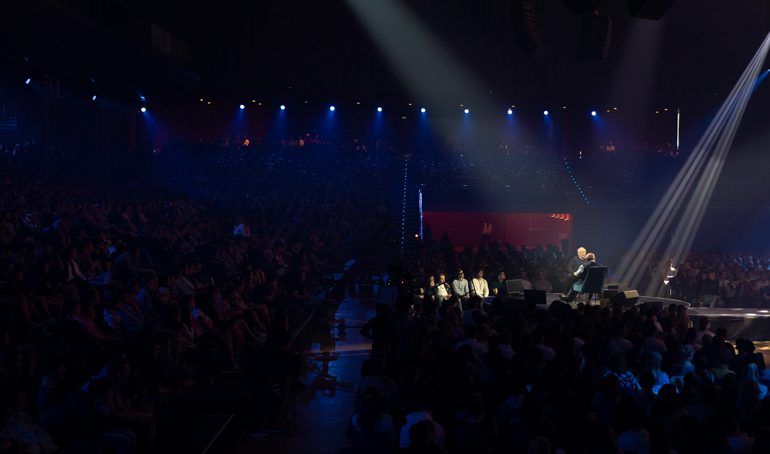 In the hall: animated films, feature films, panel discussions and other interactive tools were used to convey an interesting message to the teenagers attending the camp. Photo: BCC

Young people are inspired to read, learn and think for themselves

The evening’s goal is to inspire young people to read and reflect on the church’s history and develop their own impressions.

‘’We have worked very hard to make this an immersive experience,’’ says Solli. ‘’We have used social media in advance and have received a positive response from the young people. In addition, we have spent a lot of energy making this an attention-grabbing program, to make it easier for young teenagers to follow along.’’

This evening, historical material is presented with the goal of sparking interest in the life of Jesus Christ, and how following Him can lead to a life of continuous renewal. Here, young people receive unique insight into the life of the young Johan Oscar Smith, BCC’s founder, put into context of the time he lived in.

An animated character named Scott is a 15-year-old boy who explores what it was like in Norway at the end of the 19th century, and how the letters between Johan O. Smith and his brother Aksel highlight some exciting information. Together with the young people sitting in the audience, he meets some surprises along the way.

‘’It gave us some ‘aha’ moments when we discovered that the young Smith, who was only 15 at the time, went to sea under quite awful conditions,’’ says Hans Georg Bertelsen. He is another producer from BrunstadTV who has been involved in the planning of the evening’s program.

‘’Today, we generally do not understand how good our lives are, and this should make us more interested to discover the secrets of the Bible, as Johan Oscar Smith did from the day he gave his heart to Jesus.’’ 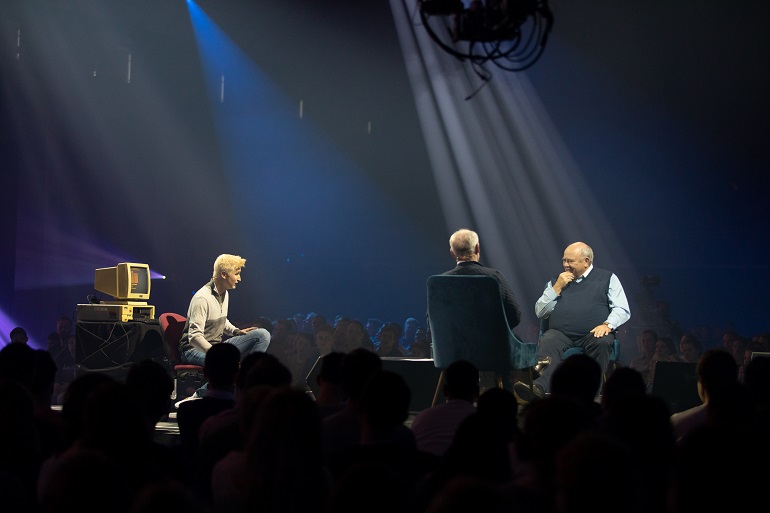 The animated character Scott appeared on stage. Here he was played by Hans Georg Bertelsen from BrunstadTV. Photo: BCC

A new book containing correspondence between the Smith brothers

There has been a new book project in the pipeline for a while, with the goal of releasing previously unpublished letters from the early 1900s. These are letters left behind by Johan Oscar Smith. He was an active writer, and the book consists mainly of salvaged letters from him to his brother Aksel.

A lot of unpublished letters have been discovered after the first collection of letters were published in “The Letters of J.O. Smith”. Moreover, some of the letters that were published in the book were shortened years ago to fit them in BCC’s monthly periodical.

Soon, all this will be released in original form, so anyone interested can read and be inspired by the interesting material.

Several of BCC’s leaders contributed to the evening’s program, and they appear on stage with various excerpts from the letters representing the time period from 1890 to 1906.

Examination of the letters shows Johan Oscar Smith dug deeply to find out how what he heard and read in the Bible was relevant for his own life. This allowed God’s Word to be revealed to him at a practical level, enabling him to think and analyze the Bible for himself.

By making all this material available to today’s young people, we hope it will inspire them to begin their own active Christian life.

READ ALSO: Young People from all over the world gather for Easter Camp in Norway