This year’s Easter conference was held under a brilliant sun for over 9,000 participants first weekend in April. For more than 60 years, BCC has organized a conference at Brunstad at Easter, and this year there was a record number of international guests

After a very successful Easter Camp for youth in the first part of the Easter holidays, the traditional Easter conference started on Friday night. Many of the 4,500 young people who had been to the camp participated, together with families and adult BCC members who in dazzling Easter weather arrived at the center from home and abroad on Maundy Thursday and Good Friday. 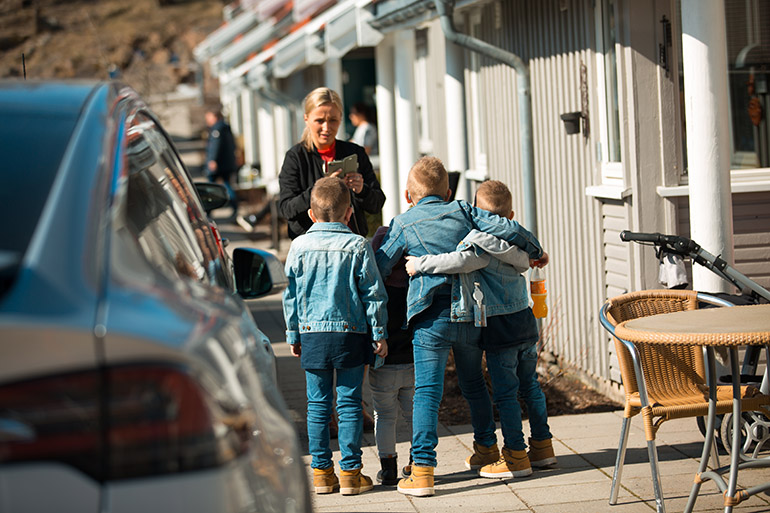 Big and little friends enjoy themselves out in the Easter sunshine. Photo: BCC

For three full days, the conference center at the Oslofjord Convention Center buzzed with life and the record number of international guests demonstrated the growing interest in traveling to BCC’s conferences. For many, celebrating the Easter season with people from many countries who share the same faith and interest in the Christian message is a great way to spend the holidays.

For the smallest, a football mini-cup was also arranged, and many children, parents, and coaches were occupied on the various artificial turf pitches on Saturday afternoon.

Five faith-building meetings were held in the course of the weekend, including a youth meeting and an inspiring TV show from the central hall. BrunstadTV was present with its entire production team plus almost 100 volunteers, and broadcasted the conference to BCC members worldwide. During the six transmissions, the Easter message and the way Jesus paved for human beings were clearly proclaimed, and many of the participants from home and abroad expressed through verbal messages that the gatherings had given them great inspiration in their personal life of faith. 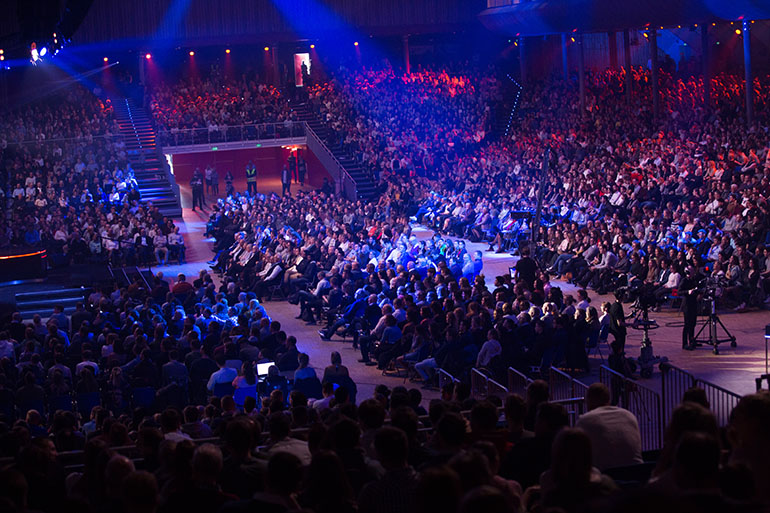 Several of the parents’ and grandparents’ generation also conveyed their extra thanks for what had been done for the young people during the Easter Camp a few days earlier. The fact that youth events with Christian content and good experiences creates a sense of community, means a lot to thousands of young people from all over the world.

Read more and watch movies and photos from the BCC Easter Camp for Youth here. 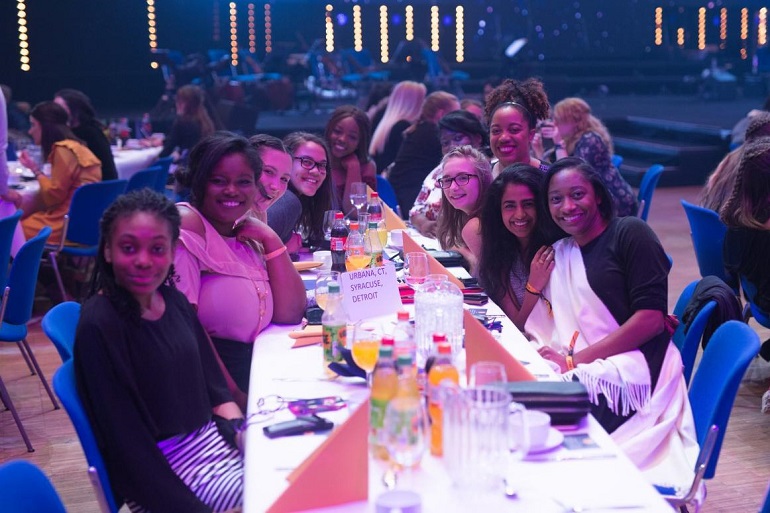 From the BCC Easter Camp for Youth, which ended two days before the Easter conference began. Photo: BCC

In the inspiring and informative “Brunstad Magazine” on Saturday morning it was also said that BCC’s youth initiative will continue so that young people will have good gathering venues in the future. The interest that young people from all over the world have shown to come to BCC’s events at Brunstad ensures that particular efforts will be made to develop special concepts and events focused on this group in the years to come.

For one group of conference participants, Easter was a very special experience this year. 56 young people from Peru, Chile, Argentina and Brazil participated in both the Easter Camp and Easter conferences, and were much rewarded for their stay. For a year and a half, they had saved up and worked for the trip to Norway, and several of them could tell of a unique journey, characterized by fellowship and many new experiences. Through films and short interviews, their story was conveyed to the rest of the conference participants during the “Brunstad Magazine” on Saturday, and they also performed a song in both Norwegian and Spanish for the nearly 6,000 listeners in the central hall. 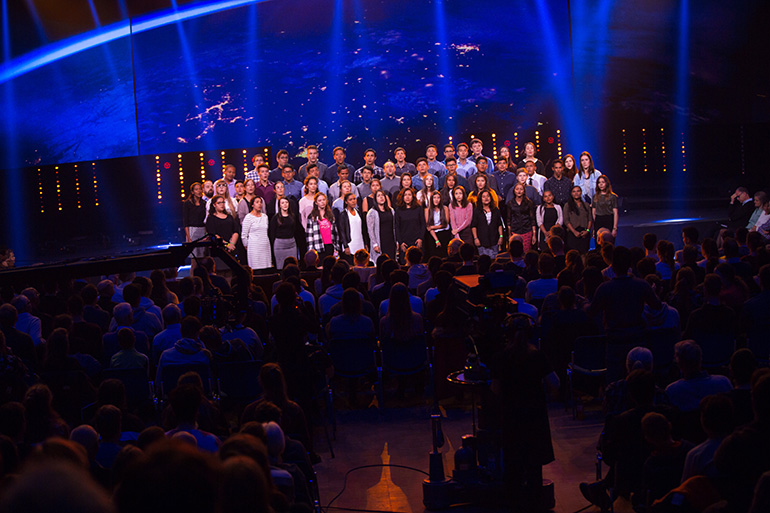 56 South American youth, who attended both the Easter Camp and the Easter conference, sing for the other conference participants in both Norwegian and Spanish. Photo: BCC

BCC would like to thank all volunteers who participated at the conference, be it with image production, translation, security and first aid, or in many other ways, in order to make a successful and memorable event for many thousands of children, youth, and adults at Easter. 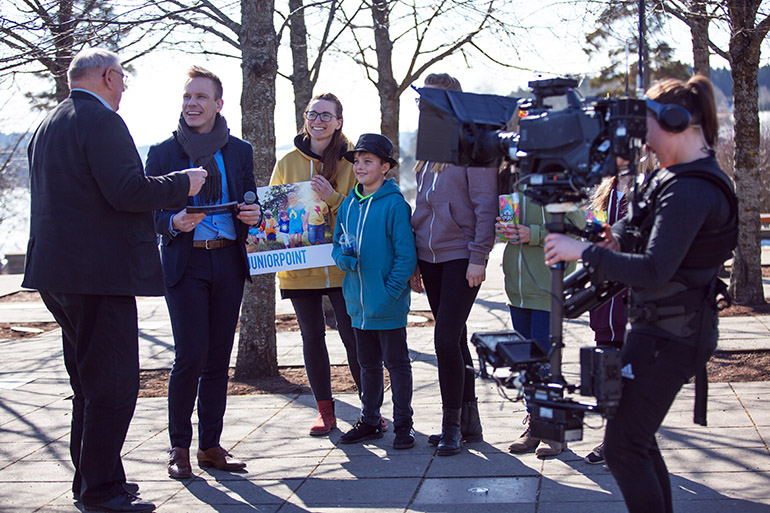 During the Brunstad Magazine broadcast, there was also given time for a small taste of what the summer’s conferences will include for families and children. Photo: BCC 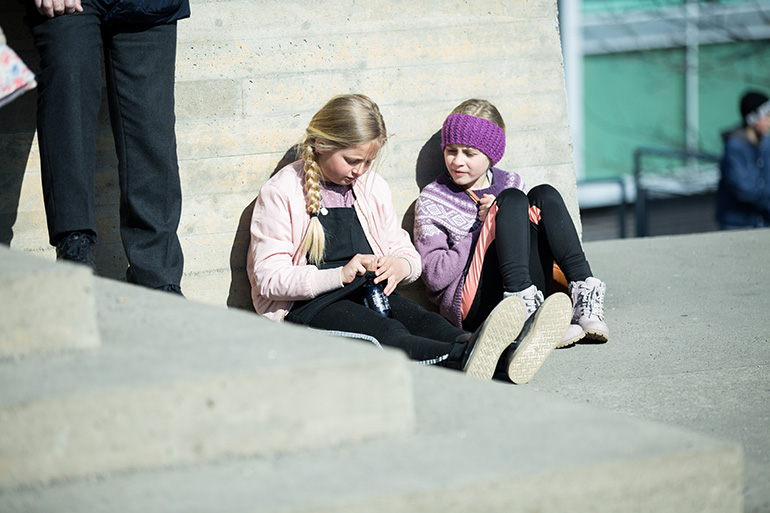 Two good friends have found a place in the sun. Photo: BCC 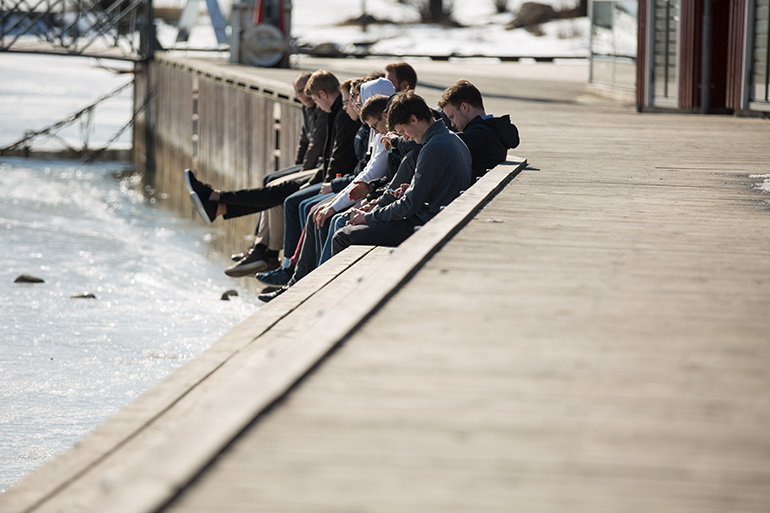 The whole conference area buzzed with life in the fine spring weather, as well by the frozen marina, where many relaxed in the sun. Photo: BCC