It’s the second day of Easter Camp, and the evening’s youth gathering is under way. After a long day of activities, over 4,000 youth are back in the hall, ready for the finale of the season’s youth TV program “In Front”.

Rousing music starts the evening off with a bang. A young program leader welcomes the audience and introduces the two adult team leaders, Harald Kronstad and Trond Eriksen. They have been active youth workers their entire adult lives, and tonight they each will lead half of the audience in the upcoming competition. 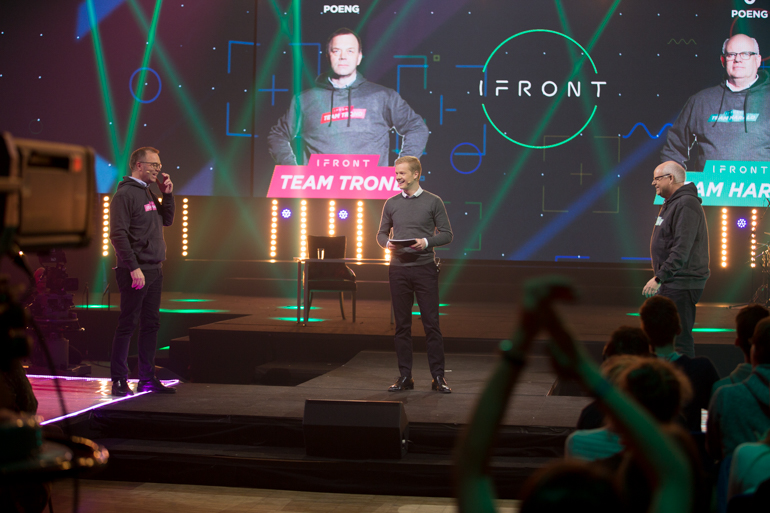 Trond Eriksen and Harald Kronstad participate in a live version of the TV program, each as a team leader for half of the audience. Photo: BCC

Throughout the winter BCC’s youth groups gathered once a month to watch a program, broadcast every month from Brunstad TV, which focused on mentoring and working conscientiously with others. “In Front” is being shown live from the main hall at Oslofjord Convention Center in conjunction with Easter camp.

In preparation for the program, a considerable effort has been made by the production team for “In Front”. Competition graphics are developed, films are produced, and the scripts are carefully prepared. Everything is done with the idea to encourage and inspire each person to live an active Christian life. 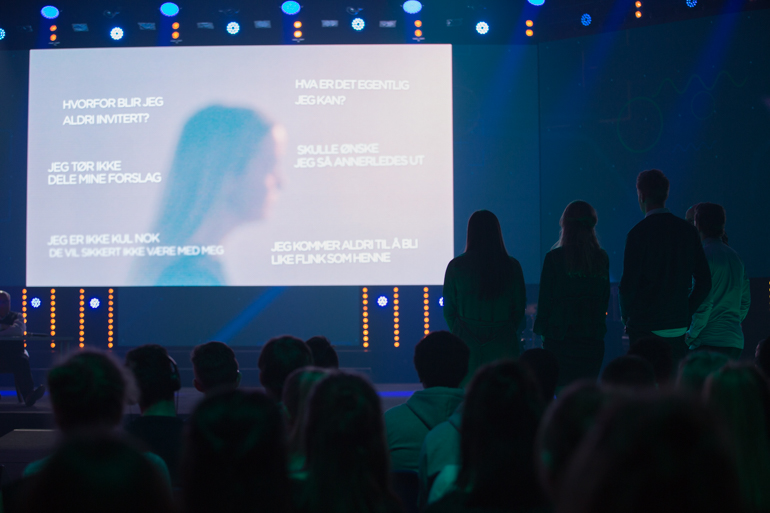 One of the films touching on complex issues young people have to deal with—the audience will work together to find some answers. Photo: BCC

The internet in the hall has been upgraded for the occasion. The target audience for the evening’s program is youth between the ages of 13 and 20 years old. Everything is geared toward increasing their understanding and enthusiasm as Christians. Participation and involvement are important factors, and when the first problem appears on the screen, the hall lights up with several thousand cell phone screens. Everyone can respond, and the results appear immediately on the screens at the front of the hall. 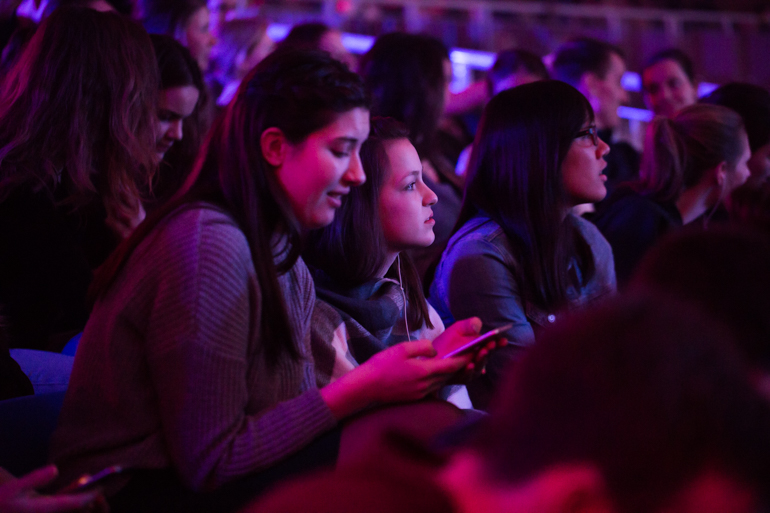 The answers are not obvious, but with teamwork, and voting from their phones, they choose the option they think is best.  Photo: BCC

The questions pertain to how we can make the right choices, regardless of what people around us think or choose for themselves. Whispers are heard here and there; it’s not always obvious what the right response is to the question.

Adults who care are good mentors

Trond Eriksen and Harald Kronstad are as engaged as their teams, and between each question there’s a pep talk and quick remarks from the stage. Kåre J. Smith is along as a neutral third party, who comments on the responses that are chosen and adds some good points to make it clearer for the young people in the hall. 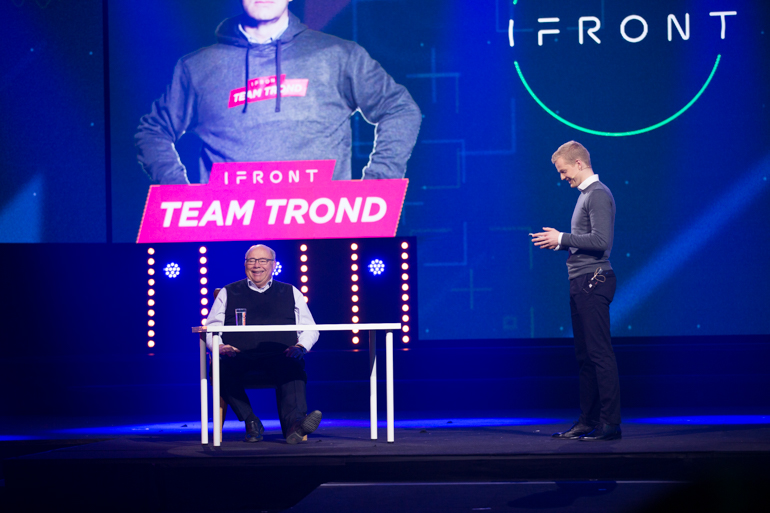 Kåre Smith is also on the stage and adds some good points when the teams have given their answers. Photo: BCC

In addition to the younger ones present, there were many mentors between the ages of 20 and 36 in the audience. They were part of the all-day activities and were also involved in the evening programs together with their activity groups. This adds an element of security and camaraderie, and gives all the participants a sense that someone cares about them.

It is “Team Harald” that ultimately wins the competition, and 10 individual winners are drawn from the winning side. The hall erupts in applause as the names appear on the screen.

By involving the audience, this live show may rank as the most interesting “In Front” broadcast in the entire series, and the involvement continued in the conversations among the groups of young people as they left the hall together. 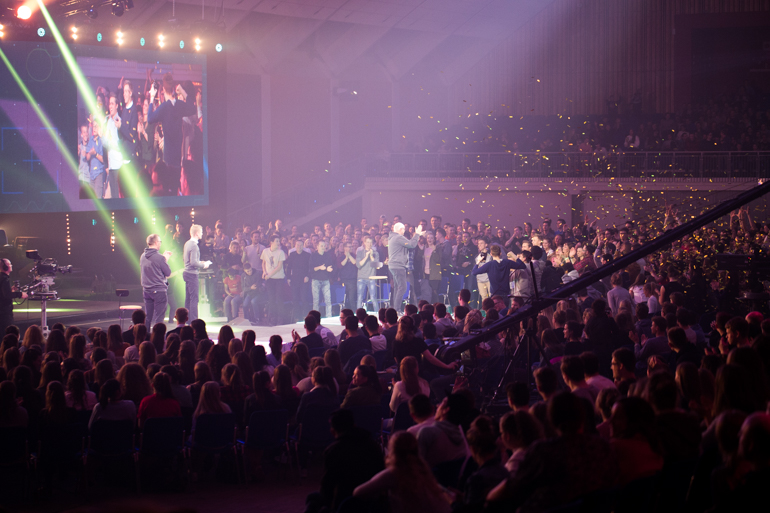 Team Harald’s half of the audience was extremely pleased they won by 20 points. Photo: BCC 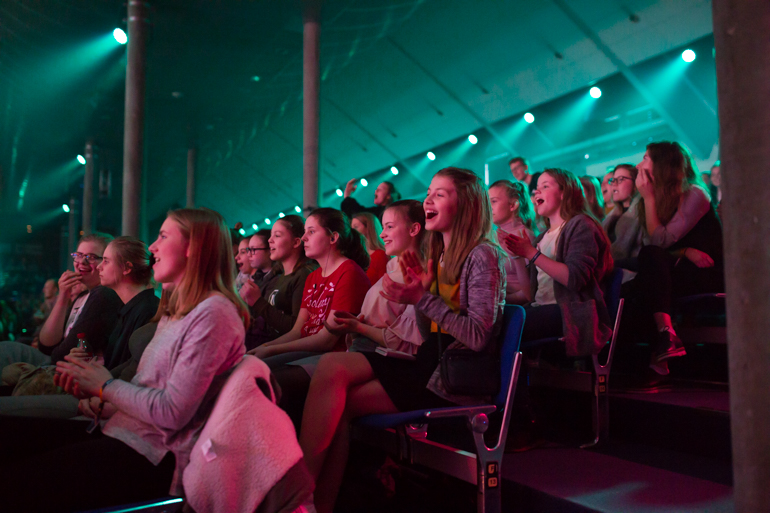 The evening’s program managed to generate wide participation among the audience, and conveyed a good, encouraging message to the youth in a creative way. Photo: BCC