BCC HAS TRIED TO HAVE OPEN AND CONSTRUCTIVE DIALOGUE 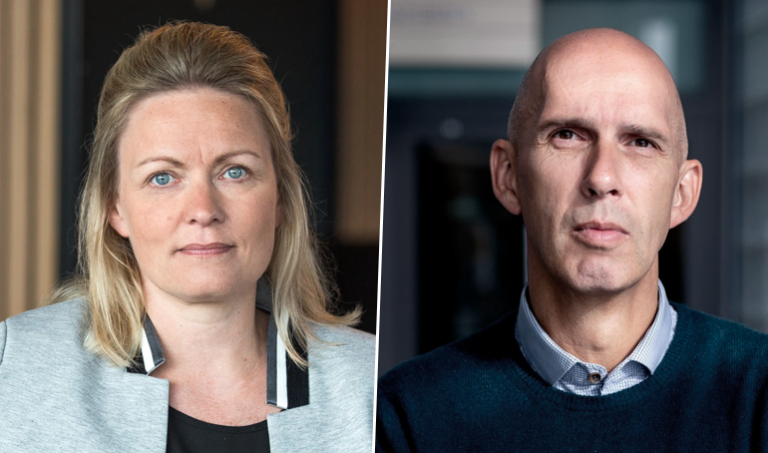 Does BCC actively incite violence? The answer should be obvious for everyone, but clearly not for Documentary and Society Editor at NRK, Frank Gander.

Yesterday Chairwoman Berit Hustad Nilsen was contacted by a shocked BCC member. This person had written an objective and polite email to Frank Gander, with feedback about NRK Brennpunkt’s teaser about the program “God’s Chosen Ones” now being broadcast on their channel. In Gander’s answer he first praised this person for being orderly. But then he wrote:

“In the long, extensive research for this documentary (where the journalists have spoken with dozens of sources), our journalists at NRK have been exposed to harassment, manipulation, procrastination tactics, threats, and assertions that it is acceptable to resort to violence to stop us, and what we perceive as an attempt at blackmail from BCC members, or from people closely connected to BCC’s leadership to stop free and independent journalism.”

Of course, the BCC member who received this response was shocked by these allegations, to put it mildly, and confronted Hustad Nilsen with them, with questions about what is really going on. Hustad Nilsen was as surprised as the person who received the email, and quickly sent the following e-mail to Gander:

Yesterday we received a forwarded e-mail from a member who has exchanged e-mails with you. This person was so shocked by what they read in your response, that they wished to confront the BCC leadership with the accusations you made.

In your email to the person in question, you write, among other things, that your journalists have been subjected to ‘assertions that it is acceptable to resort to violence to stop us’ and that this has come from ‘BCC members or from people closely connected to BCC’s leadership.’ What you describe is extremely serious, and BCC is surprised that NRK did not contact BCC as soon as you were exposed to such incidents.

We ask that you specifically explain which incidents you are referring to. We want to follow this up, as BCC considers any kind of threat of violence completely unacceptable and completely contrary to everything we stand for.

You also write about harassment, manipulation, threats, and blackmail from the same people. We ask that you also provide specifics about this, as BCC likewise considers this completely unacceptable and wants to investigate these incidents.

Looking forward to hearing from you soon.”

Frank Gander does not want to answer Hustad Nilsen in writing for the time being but asked instead for a phone call. During this conversation he repeated the allegations without being willing in any way to provide any concrete information. He referred BCC to a private Facebook page which they could read for themselves, where comments were allegedly made, which he interpreted in this way. BCC has reviewed the Facebook page he referred to, and has not been able to find any comments that can be interpreted in the direction Gander claims.

Gander only deals with individuals

Incredibly, in the phone conversation, Gander drew parallels to a report NRK is producing about North Korea and pointed out that NRK had brought in its security department and the police. He thought the experiences were comparable. Hustad Nilsen pressed Gander to be more specific when he referred to people “close to BCC’s leadership” because BCC wanted to follow it up. However, Gander insisted he was dealing with individuals, not with BCC. He then explained that the actions he was referring to were carried out by “people with a position in BCC.” Hustad Nilsen emphasized that in this case there was even more reason to be specific because then it was BCC’s responsibility to follow up. Gander was still unwilling to do so, and again only referred to the private Facebook page.

Despite the fact that in the telephone conversation with Hustad Nilsen he repeatedly emphasized the he only was dealing with individuals, Gander publicly repeated his allegations on this private Facebook page, as well as on a Facebook page run by one of NRK Brennpunkt’s sources. He wrote that people on the page have come with “insinuated threats and statements of violence against the editorial staff.”

Gander’s e-mail response to this BCC member, and his answer to Berit Hustad Nilsen, reflect a completely absurd attitude from Norway’s most powerful TV editorial office. Gander chose to convey grave accusations to a BCC member, and link these to BCC’s leadership, without ever notifying or discussing the issue with BCC.

BCC tried to have open and constructive dialogue

For over a year, BCC has tried to maintain a constructive, orderly dialogue with NRK Brennpunkt. We have attended many meetings where we have talked about BCC, and about the concerns we have in relation to the threats against us from Psy-Group’s influence operation. We have presented documentation that we believe should give NRK Brennpunkt very good reason to be more critical of their sources. We have also published parts of the documentation publicly on our website.

Not once has NRK Brennpunkt commented on the facts and the documentation presented to them. The responses we received when inquiring about this have instead been unreasonable accusations from Frank Gander, where he repeatedly accused us of obstructing the journalistic process, but without once saying concretely what he means.

Now he has gone a step further with the incredible claim that people with a position in BCC are encouraging the use of violence, and that this includes people he connects to BCC’s leadership.

Does NRK not tolerate criticism?

When Frank Gander makes such shocking claims in e-mails to people who even with the best intentions cannot be said to have anything to do with this case, it is not a reflection of solid ethical principles in one of the country’s most important editorial offices. Gander has met a Norwegian religious minority who dare to ask critical questions about NRK Brennpunkt’s journalistic process, and about influence operations from companies like Psy-Group. His reaction, and the methods he now uses do not seem to be in accordance with the fundamentals of a constructive public discourse.

It ought to go without saying, but unfortunately we must make this clear so that NRK Brennpunkt does not once again “misunderstand:”

BCC strongly disassociates itself from any use of violence, threats, extortion, blackmail, or manipulation. Relying on such measures is the complete opposite of everything that BCC stands for. Neither do we know that any of our members have made these types of statements, but in should this have happened, we completely disassociate ourselves from this. Our members, meanwhile, represent a cross-section of society, and we cannot take responsibility for what all people who rightly or wrongly present themselves as BCC members write in various private forums. We do not engage in that kind of monitoring and censorship. On the other hand, we can assure that within BCC’s sphere of influence, we take any remarks like Frank Gander described very seriously.

Frank Gander made serious allegations, which he connects to the BCC leadership. This should not remain unresolved. Gander should withdraw his allegations or go to the police and have them investigated.

Frank Gander wrote this to a BCC member who just wanted to give orderly feedback about NRK’s use of sources:

“In the long, extensive research for this documentary (where the journalists have spoken with dozens of sources), our journalists at NRK have been exposed to harassment, manipulation, procrastination tactics, threats, and assertions that it is acceptable to resort to violence to stop us, and what we perceive as an attempt at blackmail from BCC members, or from people closely connected to BCC’s leadership to stop free and independent journalism.”

Here is a copy of the e-mail sent to Frank Gander (the contents are translated earlier in this article): 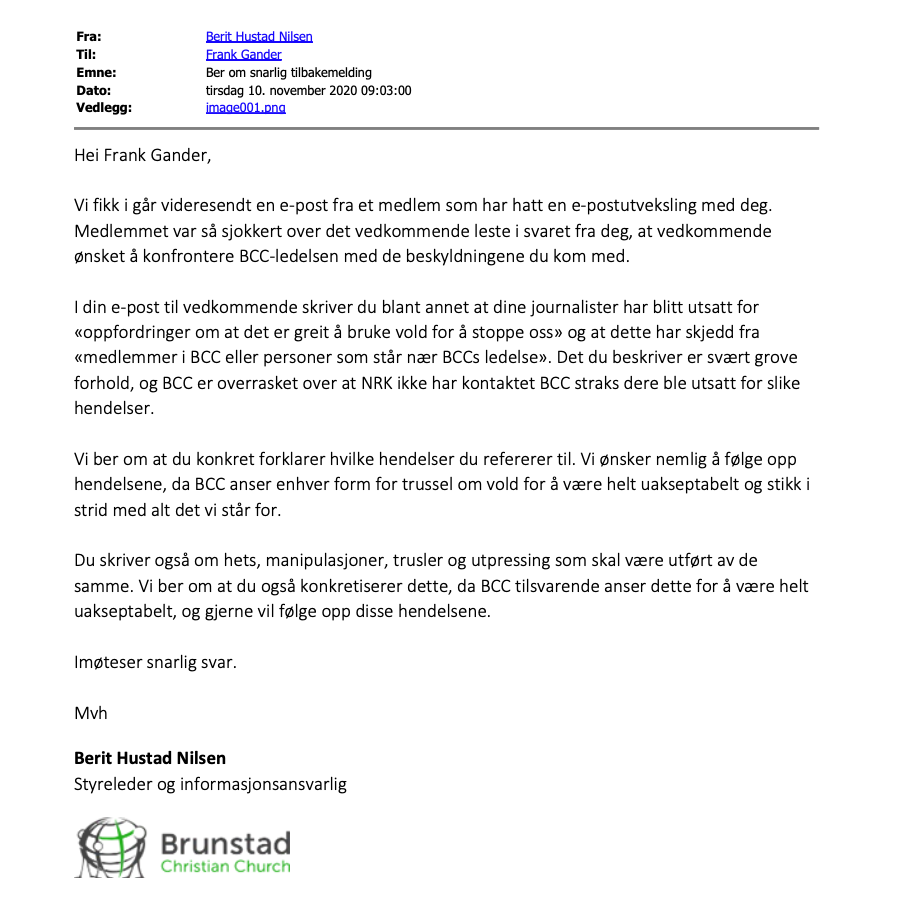 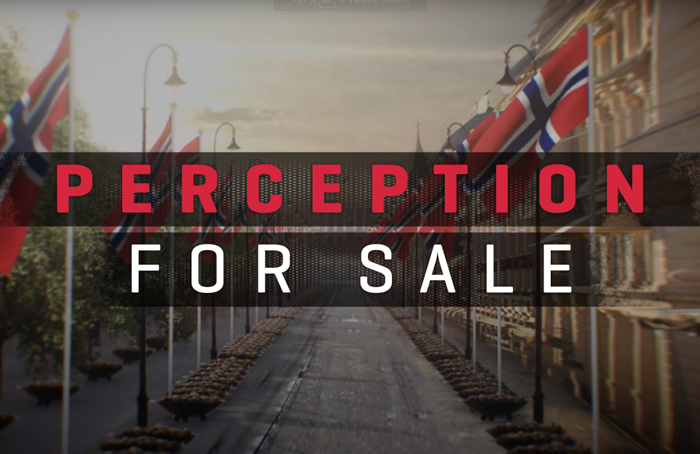 Mini-documentary: Our Experience with Psy-Group 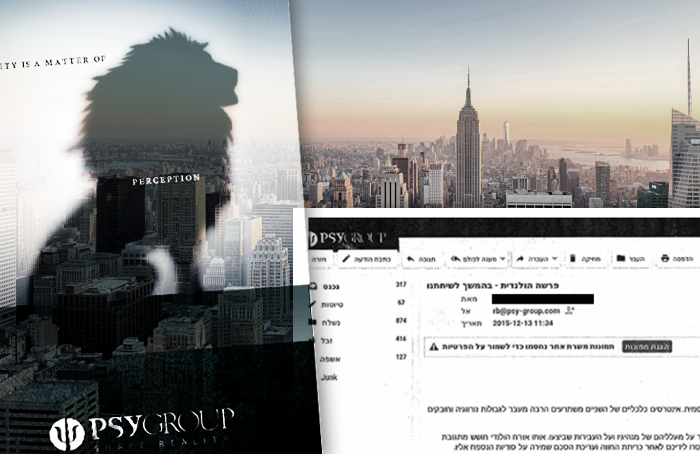