BCC and many of the local churches have considerably strengthened their net assets in the last decade. This is not a coincidence, but the result of a clear vision and goal-oriented effort to fulfill our charitable objective .

This article was first published in the BCC annual report for 2019.

In recent years years we have reversed a trend: Instead of having our vision limited by our financial situation, we now have a realm of possibilities to carry out Christian activity in new ways.

This is about taking our core mission seriously. Good tools and extensive resources are necessary in a global missionary field and the goal of teaching people practical Christianity. The desire is to reach everyone who wants to hear, learn and to do what Jesus has instructed us – His Great Commission — is our motivation.

Financial crisis a catalyst for fundraising

Shortly after the 2008 financial crisis, a new mentality began to spread among BCC’s local churches. It began in Oslo/ Follo, Norway, where the church decided to take action in relation to the association’s finances. A fundraising campaign was initiated to raise equity for future projects. Membership numbers had increased, along with the need to be able to offer activities and places to gather for children and young adults. The concept of the fundraising campaign was simple: to have 50% equity before making investments.

In cooperation with BCC, the news about this campaign was spread through our TV channel to several Norwegian and international member churches. In total, 75 churches in 18 countries joined the fundraising drive, and each individual church set specific goals through December 2020. Churches competed in achieving their own goals, with the churches challenging each other along the way. The campaign became an engaging project, which many wanted to be part of.

Some of the funds raised gifted to BCC

Most local churches have given large donations to BCC’s central organization. This money was put into a fund for future use. This fund and parts of some local churches’ funds have been loaned to Brunstadstiftelsen (Brunstad Foundation) for financing its ongoing construction project.

A fundraising campaign for the future

The goal of the fundraising drive was twofold; first, future generations will have sound finances both locally and centrally, and second, financing is secured for the building project at Brunstad.

BCC has thereby secured a property we can rent for our Christian conferences several times a year, which is also important for enabling future generations to gather around the gospel.

Major project draws to a close in 2019

As a result of a moving enthusiasm and thousands of individuals effort over more than a decade, the massive fundraising campaign is nearing completion in 2019.

This has brought us closer together as an organization. A survey from 2019 is an important indicator of how members perceive the campaign. The survey results show that 95 % state that “contributing to voluntary work and fundraising for the church has been positive for me / my family”.

Along the way, BCC has assisted individual member churches with advice and technical input regarding finance and internal controls, to ensure that donations are handled properly and spent according to the charitable objectives.

Net assets with external restrictions are grants or subsidies received from other organizations in 2019 that not spent during the accounting year, but are committed for use in the coming years, according to the donors’ requirements.

Net assets with internal restrictions is the BCC Fund . The Assembly of Representatives established this Fund in 2017, with 750 million NOK in assets. Including returns since its formation on July 1st, 2017, the Fund has increased to 832 million NOK at the end of 2019.

The BCC’s Fund’s purpose is to ensure the long-term realization of BCC’s charitable objective, which is mission. 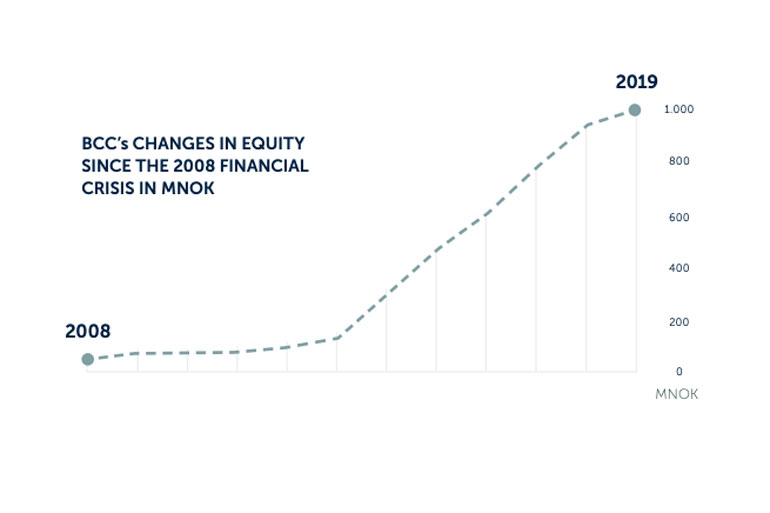