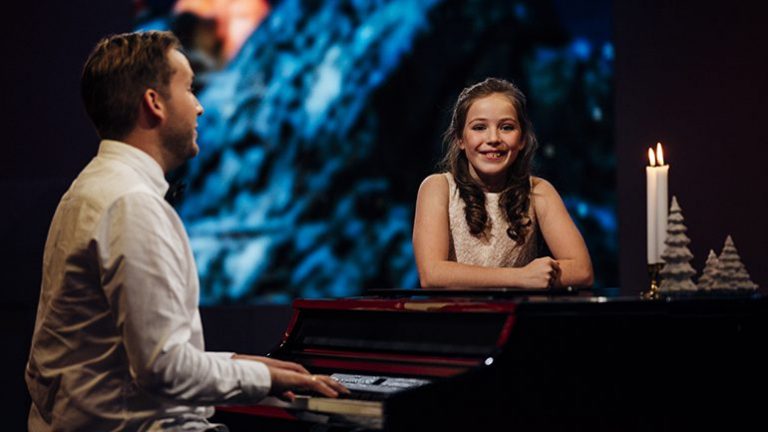 For BCC members worldwide, the Christmas celebration is an important tradition. Throughout the almost 120 years since the church was established, this festive season has been celebrated together with family, friends and local churches. BrunstadTV contributes to the Christmas atmosphere with its own Christmas series every advent.

We are once again in December, and for the fourth time, everything is ready for new episodes of “Merry Christmas”. The series is broadcast on the church’s own TV channel every Friday in December, and is also available on the BrunstadTV’s YouTube channel. The opening night was 1st of December, and the program is intended to be an atmospheric part of Friday’s coziness until Christmas.

Christmas is important for us

Celebrating the little child Jesus who came to earth to show us a way out of darkness and evil, and into light and joy, has been a matter of course for BCC members through our more than 100-year history. The message of Jesus as our Savior and redeemer enlightens and gives hope and enjoyment in everyday life.

The fact that the children can experience a home filled with this joy and with parents living in harmony with the words from the Bible is something the church values very highly. We hope the TV program “Happy Christmas” can spread light and warmth for children and families in the advent period. 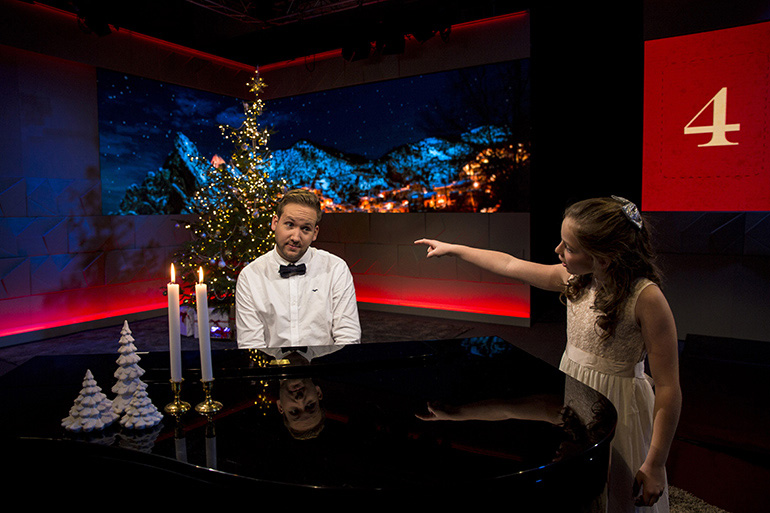 The countdown for Christmas has started at BrunstadTV, which sends a total of four Friday programs in the weeks up to Christmas. Photo: BCC

Production has been prepared for a year

Celine Reiersrud, who is the project coordinator for “Merry Christmas”, tells us that they have been preparing the Christmas series for almost a year. – We actually ran the first outdoor scenes in January because we had to take advantage of the snow while it was there. In the course of a few weeks of the new year, we recorded both music videos and the little series about the “Elf on the shelf”, who enjoys the life of the farm while continually playing new tricks to the despair of the people who live there, she says. 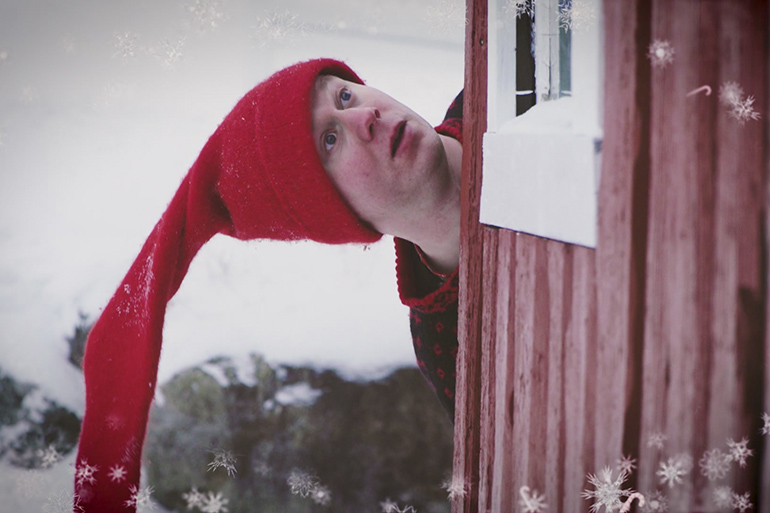 “The Elf on the shelf” in action, to the despair of both people and animals on the farm. Photo: BCC 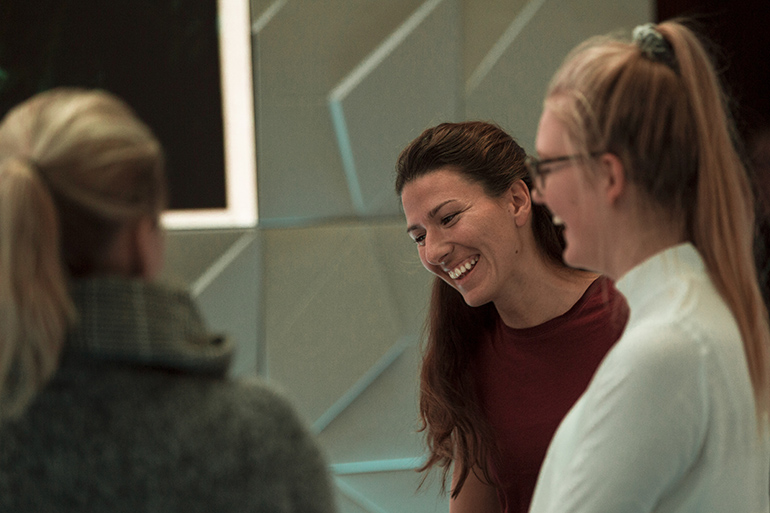 Celine Reiersrud is managing the “Happy Christmas” project and has had a large crew with her during the year in which the series was produced. Photo: BCC

Fewer, but longer episodes of this year’s Christmas calendar

– This year we have replaced 24 Christmas calendar episodes with four longer programs, which will be sent every Friday in December. There will be between 30 and 40 minutes with beautiful Christmas music, funny movie clips, catchy music videos and just a lot of happy Christmas atmosphere, she smiles.

“Happy Christmas” has ingenious producers who are just as good at singing as chatting. Not least, Norah (9) who is a star at the Christmas workshop. Here she gets help from co-producer Oliver (29), who has a bit to learn on the hobby front. – What would have happened if we didn’t have tape at Christmas, is one of several questions that Nora must answer. “These studio scenes from the Christmas workshop were perhaps some of the most demanding, but also the most fun to record,” says Celine. 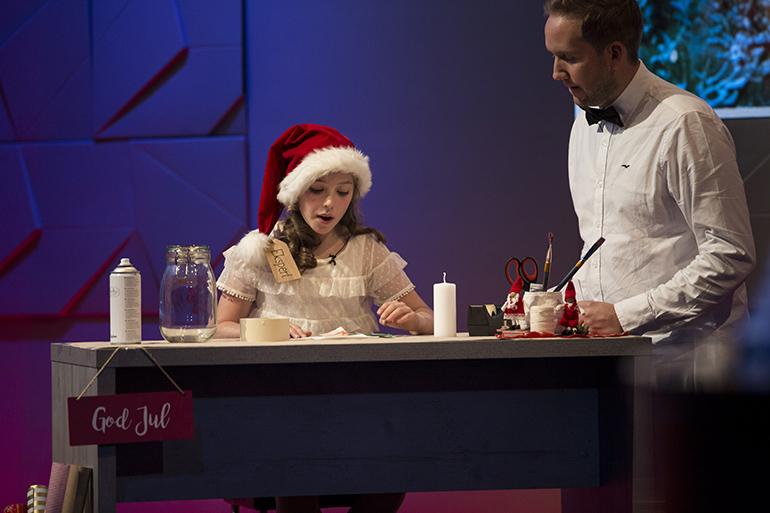 Christmas workshop: Here Norah (9) is the expert, and Oliver has to follow along and learn. Photo: BCC

Television production involving children is always a challenge, but with Norah it really went far better than what we had expected. She was full of energy and smiled all the way through, even though we recorded all four episodes on one and the same day, and it took many hours at a stretch.

Celine tells us that there are also some nice episodes included in the program, including an exciting Christmas adventure that has a thought-provoking content as well. The program intends to focus on good attitudes around Christmas, and addresses different topics about the children’s experience of the holidays, such as waiting and getting bored, being disappointed if you don’t get what you want and learning to be grateful for what one has. 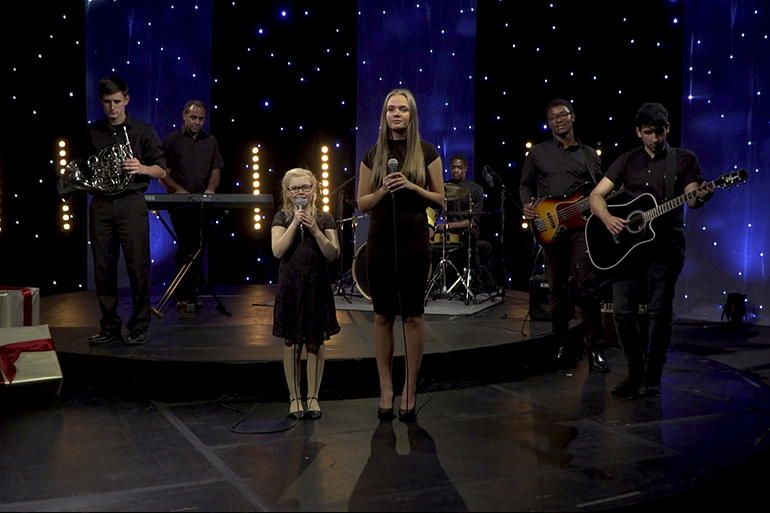 Last year, BrunstadTV sent daily episodes, but the team behind Merry Christmas believes that the families get even more enjoyment from the format they have chosen this year. The foure weekly episodes coincides with the Friday’s initiative on BrunstadTV called “Mega-Friday”, where new quality programs is sent at the start of the week-end.

– We hope “Happy Christmas” will be a highlight where people want to gather as a family, says Celine. – And if you don’t have the time to see the program then and there, it will be resent for several days, as well as episodes being posted on our YouTube channel. 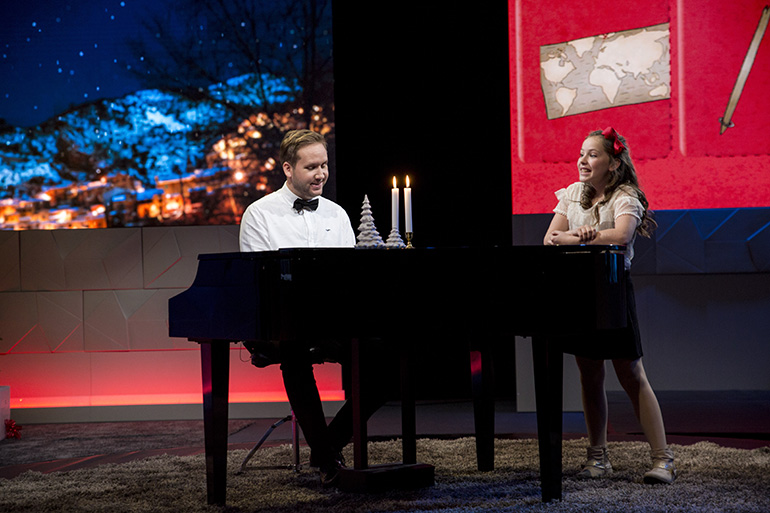 Always a good atmosphere when these two invite us to the Christmas party around the grand piano. Photo: BCC

Celine tells us that this is the first year she has been directly involved in the production, and she felt it was an exciting task to be the project coordinator and also partly responsible for the directing. “During the actual studio recording, which we carried out in October, a large part of BrunstadTV’s crew were present, and there were over 20 people involved,” she says. “This has been a big project, but we have been planning it for a long time, and a large team of both employees and volunteers have contributed in various ways. In the content production, which has taken place

continuously throughout the year, about 40 people have been involved, either with planning / direction, music production or technique, she concludes.

After the premiere on December 1, there is little doubt that BrunstadTV has found the recipe for a good Christmas atmosphere. We are already looking forward to next Friday, to more music, more tricks from the “Elf on the shelf”, and to see how Ola is doing in the Christmas adventure.

Link to the whole first episode of Merry Christmas:

Link to the first episode of the atmospheric and exciting story “Ola’s Christmas wish”:

Link to BrunstadTV’s series about the Christmas Gospel:

A VIRTUAL EASTER: THE BEGINNING OF SOMETHING NEW 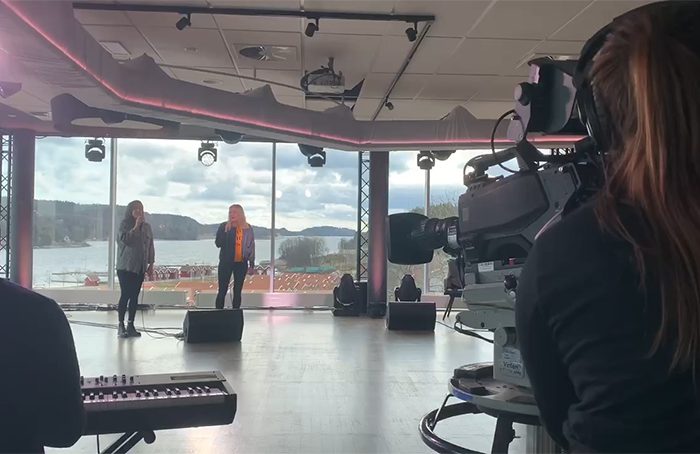 Video: Day of Prayer for the whole of Norway